Swimming in salt water is wonderful; drinking it is not. Four hundred years ago, the first American settlers in Jamestown, Virginia, ran into troubles during their first five years because the fresh water they depended upon for drinking turned brackish in the summer. Suddenly, besides the plagues, angry Indians, and crop difficulties, they had to find new sources of fresh water inland. Libraries and publishers are facing a similar challenge as the hybrid world of print and online publications have changed the economic certainties that have kept both healthy.

The past five years in the information world have been full of revolutionary promise, but the new reality has not yet matched the promise of a universal library. Google Scholar promised universal access to scholarly information, yet its dynamic start in 2004 has not brought forth many new evolutionary changes since its release. In fact, the addition of Library Links using OpenURL support is the last newest major feature Scholar has seen. The NISO standard that enables seamless full-text access has shown its value.

For years, It’s been predicted that the Google Books project would revolutionize scholarship, and in some respects it has done so. But in seeking a balance between cornering Amazon’s market for searching inside books, respecting author’s rights, finding the rights holders of so-called orphan works, and solving metadata and scanning quality issues, its early promise is not yet fulfilled.

Although one view of history is predicated on innovation bringing radical change, cultural institutions know that changes often come from slow progress over time instead of abrupt changes wrought from dramatic agreements.

Et tu, LC?
The history of putting information online shows that the process has been filled with government investment and intervention. There have been dramatic research and development from large companies like Lockheed Martin (with Dialog) and IBM (for ILS development) followed by retrenchment. Sometimes the for-profit waters are saltier than scholarship can abide, though companies are certainly needed to fund development and push scale forward.

In A History of Online Information Sources, 1963-1974, Charles P. Bourne and Trudi Bellardo Hahn assert, “The serious application of computers to document reference retrieval began in the late 1950s, with slow serial searches of small files of bibliographic records on magnetic tapes. A precursor of effective, large-scale online information retrieval (IR) systems was an experiment in searching bibliographic records on an IBM disk memory system called RAMAC (Random Access Method of Accounting and Control). …The genesis of online retrieval systems can be traced to the first half of the 1960s.” What we see as nearly comprehensive coverage of journals online is a product of over forty years of experimentation, from metadata to full-text delivery.

Early efforts from New York University to digitize their research collection with the help of the country of Abu Dhabi, the Hathi Trust, and OCLC shows the multiplicity of effort required to operate at the scale required for a large research collection. The initial questions are large: What format is most useful? Is this a one-time effort, or will there be opportunities to revise the scanning? Is it necessary to scan all works, or only unique collections? What about copyright? Do lawyers need to hammer out agreements for campus-wide access vs. universal access?

One wonders why a national library isn’t rising to answer the call to make all books ever published available online. The Library of Congress has developed a promising answer in the World Digital Library, but they have not yet been vocal about their successes. Sometimes, code speaks louder than op-eds in the New York Times. And as Karen Schneider pointed out, Sergey Brin seems to be unaware that WorldCat has a number of holdings for books he claims are “no longer available.” And perhaps without Google Ad $$ powering the digitization, there is a delay while the numbers are run to account for the cost of full versus selective coverage, since historic cooperation is required to pay for the total cost.

Solutions via Standards
Journals still exist; newspapers are published every day; architectural wonders in the form of libraries are standing. But one day, you enter the library and the magazines are in the basement instead of the entrance. In this era, books have gone from closed to open stacks.

Jean Luc-Nancy provides a helpful theoretical framework on what makes a book unique in On the Commerce of Thinking: Of Books and Bookstores. In it, he says “Libraries and bookstores are the depots, reserves, and shop windows of those coffers, whose locks must be forced before they are closed again with a new bolt and latch.” He goes on to assert that “the library or bookstore—as we know, they used to be the same thing—is nothing but the Idea of the book as exposed substance, as subject that shows and presents itself.” His point is that books are unique, since they contain their essence within themselves. Unlike letters, memoirs, treatises, pamphlets, or lampoons, a book is neither reducible to container nor content.

Since books are perhaps the last item in society that have a known function that transcends the ability to be contained within a given economic system, it’s important to think about ways of preserving access to information that we have today. In The Anarchist in the Library, Siva Vaidhyanathan writes “Recently, individuals have used widespread, low-cost, high-quality technologies to persuade, and organize over long distances, beyond the prying ears and eyes of powerful institutions. Digitization and networking make anarchy relevant in ways it has not been before….Anarchy is not necessarily chaotic and dangerous. It is organization through disorganization—anarchist tactics generally involve uncoordinated actions toward a coordinated goal.” To me, this is what the standards community represents at its heart—the ability to leverage community thinking about seemingly intractable issues like wide-scale digitization to form consensus that brings forth a series of changes that benefit readers, librarians, publishers and companies.

Going direct
As Andrew Carnegie famously said, “I choose free libraries as the best agencies for improving the masses of the people, for they give nothing for nothing. They only help those who help themselves. They never pauperize. They reach the aspiring and open the chief treasures of the world—those stored up in books. A taste for reading drives out lower tastes.”

One notable advance in the past fifteen years is the lowly weblog, which Scott Rosenberg chronicles to good effect in Say Everything: How Blogging Began, What It’s Becoming, and Why It Matters. Giving librarians the direct ability to express themselves to patrons is a great start, but what if this expertise was aggregated and categorized to bring order to the universal library? What if standards for sharing, citing, and exporting books made the salty water of the for-profit enterprises into the brackish water they are, and what if free access to searching and reading books online was the tonic water democracy needs?

Note: This was supposed to be the last editorial in a series of eight written for Information Standards Quarterly. Thanks to Todd Carpenter and the NISO board for funding the expansion of a newsletter into a magazine, though its viability and direction are shifting yet again. As ISQ optimizes its financial model, I hope to continue to write about these topics. In addition, I’m available for consulting and speaking via my company, Bookism LLC. 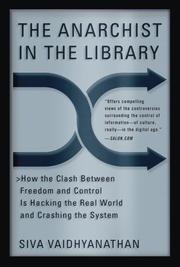 The Anarchist In The Library: How the Clash Between Freedom and Control Is Hacking the Real World and Crashing the SystemSiva Vaidhyanathan, Siva Vaidhyanathan; Basic Books 2005WorldCat•LibraryThing•Google Books•BookFinder